Pike Industries was established in 1872 and has developed through five generations of family leadership.

In 1870, the use of asphalt for paving began on a stretch of road in front of city hall in Newark, New Jersey under the direction of Professor E.J. DeSmedt, a Belgian chemist. Two years later in 1872, Luther M. Pike of New Hampton, New Hampshire founded Pike’s Improved Concrete Company at the age of twenty-one. The company quickly grew to three crews of ten men each aided by twelve teams of horses. Aside from the horses and wagons, the equipment primarily consisted of rakes, shovels, hand rollers, and barrels for mixing the asphalt. During the winter months, Luther took on lumbering projects to keep his men busy. Pike’s Improved Concrete Company established itself as a reputable paving company, and business began to spread throughout central New Hampshire and into parts of Vermont and eastern New York. One of the first major contracts in Vermont was the paving of West Street, also known locally as Merchants Row, in Rutland circa 1880.

In 1886, Luther purchased Robie Construction Co., and merged his own company with Robie, and moved the business to Manchester, New Hampshire. In the late 1800’s, Milo Lindell Pike, third son of Luther and Ella Pike, set up a new business with some help from his father; the best raker on Robie’s payroll and a $10,000 loan. His new business was set up under the name of L.M. Pike & Son back in the New Hampton area.

Around 1920, Randolph Kelley Pike, Milo’s only son, joined the business after having served in the Army during World War I. By this time, automobiles had gained popularity and were taking to the highways in large numbers. Realizing that the company would not be able to handle the demand for the growing number of contracts with the hand method of mixing, Randolph purchased a 500 pound Warren Bros. batch plant in 1923 and set it up in Tilton, New Hampshire.The plant averaged production of seven tons per hour, and it served the company for almost twenty years, supplying hot mix for most of New Hampshire’s early paving projects. This plant is now proudly displayed at the headquarters in Belmont, New Hampshire. 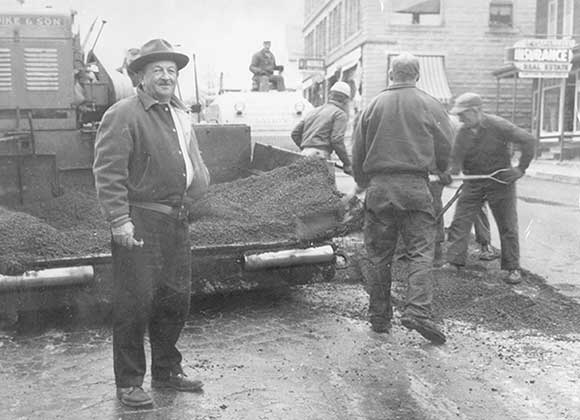 Then in 1949, Milo Luther Pike, the only child of Beatrice and Randolph, officially joined the company after having spent many summer vacations learning about the family business. He assumed the management of the business in 1952, and modernized the Warren Bros. plant in 1953. The upgrade doubled the production capacity to as much as 150 tons per day, and one man could operate it.

In 1954, a 1 ¼ ton Hetherington & Berner plant with production capacity of 75 tons per hour was purchased for $65,000. That year, the first asphalt paver was also added to the assets of the growing company. This was very advantageous for the firm as the Highway Trust Fund was passed that year and helped contribute an increase in its business. 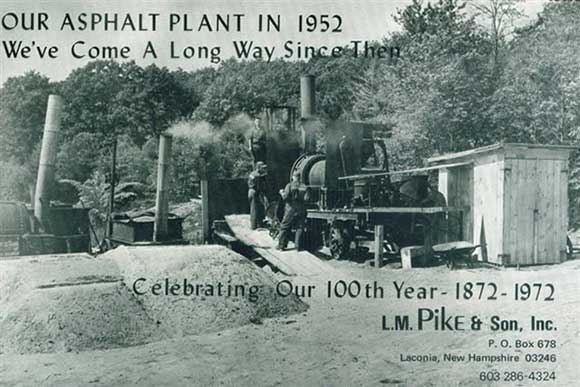 By 1957, two more asphalt plants were added, raising the company’s annual production of asphalt to 90,000 tons. At this point, Milo opted to incorporate the firm.

In December of 1968, the company began to expand once again, and bought Northern Paving & Construction in Gorham, New Hampshire, adding two asphalt plants and some additional rolling stock to the company. The company also began to diversify in the early 1970’s and had several different divisions operating.

In May of 1973, the name was changed to Pike Industries, Inc. to represent the diversification that had taken place. Subsequently, in 1976, Pike bought Haven Crushed Stone in New Haven, Vermont as their first aggregate operation, and continued this vertical integration by purchasing Waterford Sand & Gravel in Waterford, Vermont in 1977 and Hooksett Sand & Gravel in 1983. 1983 also saw the company’s entry into the State of Maine with the purchase of another asphalt plant in North Waterford from Cianbro Corp. 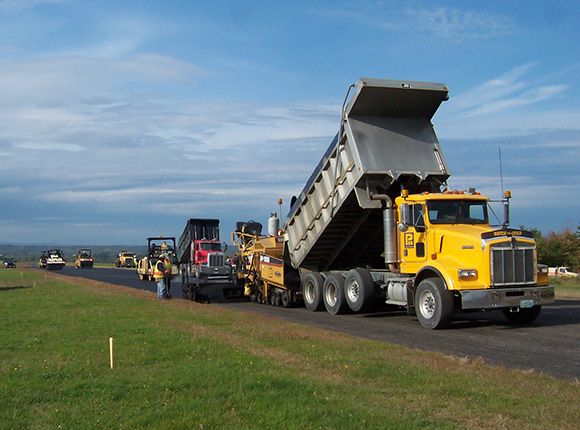 After serving communities for over 140 years, we are definitely in the business for the long run. Pike Industries, operates on the premise that quality work, good service and dedicated employees are the basis for our long history of success. The company continues to train employees, and research better methods and products to provide first rate construction to customers.